I’ve been fortunate to try the Virtuix Omni VR treadmill several times over the course of its development. At every point though, I was testing some variation of the original prototype seen in the company’s highly successful Kickstarter campaign. That is until now—at CES 2015, Virtuix revealed the production version of the Omni, and I got to take it for a stroll (and sprint).

The concept of the omnidirectional treadmill (let’s call it a VR treadmill for short) has been around for a long time. Most prototypes of such devices were huge, heavy, expensive, and complicated. However, with the recent push toward consumer virtual reality, demand rose for affordable and practical in-home VR treadmills. So devices like the Virtuix Omni, Cyberith Virtualizer, and theWizdish floated to the top. All three devices make use of a passive walking component which serves to make them cheaper, more reliable, and more practically sized than their active brethren.

At CES 2015, Virtuix revealed the production-ready version of the Omni treadmill. Upgrades from the prior prototype include a safety ring with adjustable height, a more comfortable and ergonomic harness, and IMU-based tracking pods which affix to the user’s shoes (previously the Omni employed capacitive tracking)—and the VR treadmill is now more easily collapsible for stowing away. 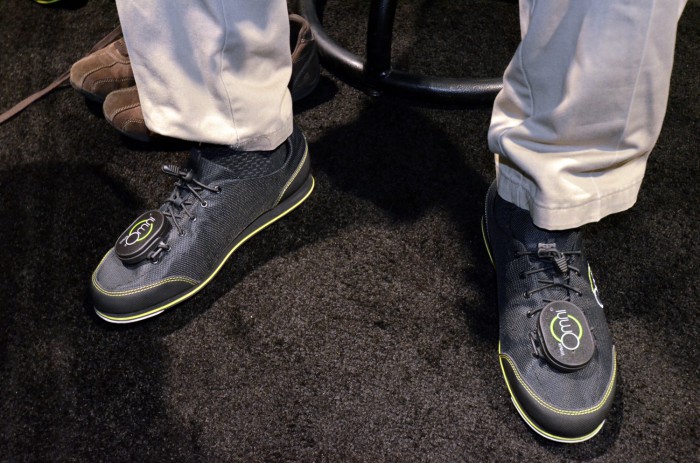 The adjustable height of the Omni is probably the biggest improvement over the prototype. Fitting the device properly makes it much more comfortable to use and in my testing felt like it resulted in a more natural gait. Virtuix designed the adjustment abilities of the device smartly so that you can do everything from within the VR treadmill itself. After stepping in and buckling up the harness, you can use your feet to unhook the locks that hold the safety ring in place. With the handles on the sides, you can raise or lower the spring-balanced ring to match your height.

Virtuix says that the Omni’s curved surface was designed to simulate a natural stride. I’m not well read in the field of gait analysis by any stretch of the imagination, but in my experience with the production Omni, forward movement feels like a very good analogue to the real deal. Walking and running forward feel very natural, especially once you’ve got the Omni adjusted to the proper height. There’s a bit of a learning curve as you first understand how to ‘run into’ the ring around your waist, but after a few minutes of  walking, I would think that most would be ready to don a VR headset and take a virtual stroll 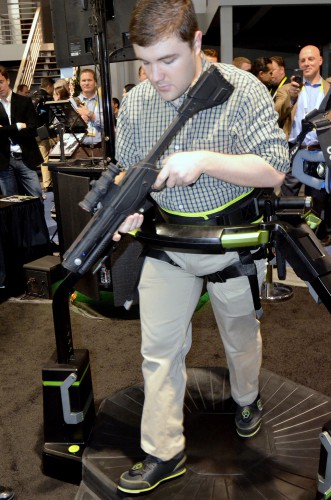 Turning in the Omni works, but it doesn’t feel terribly natural, at least not while running. Broad turns are fine, but cutting sharp corners or quickly turning 180 degrees can be an awkward affair. It’s not that it can’t be done well enough, it just won’t feel like you’re used to in the real world. Turning sharply while running ends up feeling like you’re on rollerblades more than shoes, but thanks to the safety ring, you can just kind of deal with it.

At CES 2015, after I got hooked into the Omni, I donned the Oculus Rift DK2 headset (which had a suspended cable so I didn’t get wrapped up) and was handed a Bluetooth gun. The gun functioned as a simple controller for shooting and reloading, but aiming is still done with your head. It’s expected that down the road there will be experiences that allow independent head movement and weapon aiming (something I’m really looking forward to), but at this point, it’s a BYOMC (bring your own motion controller {and supported game}) deal.

The experience I played using the Omni was a first-party demo title which had me sprinting around and speed shooting targets as I moved from one room to the next. The goal was to hit all the targets and complete the course as fast as possible. One of the things that most excites me about VR treadmills like the Omni is the ability to bring physicality to gaming. By the end of my first run, I was compelled to try again to beat my time. Not only did I pull it off, but I had a lot of fun working up a good sweat. 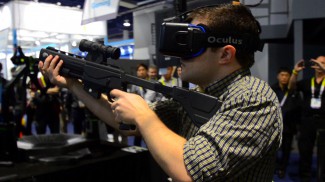 The speed shooting demo does a decent job of designing for the Omni’s strengths, with long rooms to sprint through and little need to turn completely around on a dime. At first I would run into a room and stop in place to shoot targets, but as I got the hang of it, I begun to run-and-gun, which was really fun when pulled off successfully—after using the Omni people may finally realize the absurdity of an FPS character running at 20 MPH while pulling off headshots with a sniper rifle!

The newly IMU-based foot tracking (achieved with wireless sensor pods that clip onto the Omni’s special shoes) made the virtual walking feel more responsive than at any point in the Omni’s past. At CES the company was demonstrating analogue speed for the first time (the faster you run in real life, the faster you move virtually), which really motivated me to get my move on when I was trying to beat my previous record. The delay between moving in real life and in the game felt ok, but stopping was a more sluggish affair. Occasionally I would overshoot a target that popped up right as I was about to pass. Currently, with no ability to walk backward, that meant I had to turn completely around, walk a few steps, then turn around again to reface the target.

When I brought up that delay between stopping in real life and stopping in the game, Virtuix CEO Jan Goetgeluk pointed out the meaty antennas the company had installed in an effort to best pick up the signal from the IMU pods (indeed, CES is a nightmare scenario for wireless technologies). Interference may have contributed to the delay I felt, so I’m reserving judgement there until I have a chance to test in a more controlled scenario.

Backward walking functionality should come in time, and I can only imagine that Virtuix will continue tweaking the foot tracking software.

Jumping was also not something I tried as the speed shooting demo didn’t have any gaps to leap across, though I am very curious to find out how well it will work.

Undoubtedly, the Omni is going to work best with games that are custom made for it. The speed shooting demo I tried was definitely fun on the surface, but it’ll be interesting to see if developers can dream up games that offer depth and genuine replayability for more than just exercise—though something as simple as a version of Temple Run, where you really have to run (and jump!), would probably be a blast on the Omni.

Virtuix currently offers the Omni for pre-order for $499, but says the price is due to go up to go up. “The final Omni design is meant to be stunning and impressive. The final production cost, however, has increased compared to our initial estimates. As a result, we will increase our selling price on February 1, 2015, to $699,” the company shared in a recent update to their Kickstarter campaign. They expect to ship the first Omni units this quarter.