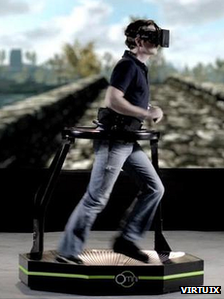 Gamers can walk, run and jump on Omni’s curved base
Continue reading the main story

A physical platform and matching shoes which allow video gamers to control characters with their foot movements are to go into production after securing crowd-sourced cash.

Omni will use shoes fitted with sensors to track the motion and direction of the player.

They also have pins on their soles which fit into grooves on the stand’s base to prevent users from slipping.

However, one analyst said that while the idea sounded fun, its limitations might prevent it selling to a mass audience.

Virtuix, which is based in Houston, Texas, posted the project to the Kickstarter funding site earlier this week seeking $150,000 to help turn its prototype into a commercial product.

Although Omni’s green-and-black platform is its most eye-catching feature, the plastic and steel contraption itself does not feature any electronics.

A demonstration version – funded through its founder’s personal savings – uses a Kinect sensor to achieve motion tracking, but the firm says Microsoft’s peripheral will not be needed for the final product. 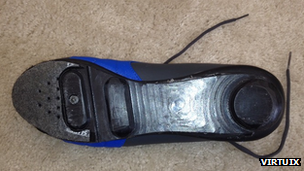 Instead the plan is to integrate accelerometers and magnetometers into customised shoes to detect the player’s speed and orientation.

The rest of the equipment is designed to stabilise the gamer as they move about.

Virtuix says the platform’s low-friction curved base and radial grooves help players achieve a “natural gait”, while an upper-ring and belt mechanism prevent them from falling over.

Associated software interprets movements as key strokes, allowing the owner to use Omni with any PC or Macintosh game that allows them to customise its keyboard controls.

However, Virtuix indicates that the kit works best if games developers use its software development kit to ensure real-world footsteps match their in-game equivalents.

Although the equipment can work as a standalone product, Virtuix is pitching it as a virtual reality add-on to be paired with products such as the upcoming Oculus Rift headset and Razer Hydra motion-sensing controls. 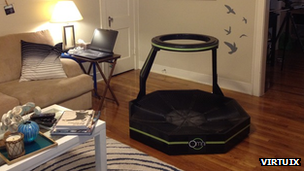 “The Omni takes this VR experience to the next level, allowing you to move naturally in your favourite game,” the firm’s chief executive Jan Goetgeluk told the BBC.

“The feeling of immersion of physically walking around in a virtual world is mind-blowing.

“It’s an experience that sparks the imagination of a large audience.”

However, Virtuix suggests it could have other uses such as allowing architects to walk through 3D graphic mock-ups of their designs or as a tool to help organisations train their staff using VR simulations.

It adds that Omni’s software includes an option to track distance travelled and calories burned.

“We believe the Omni can help reduce the problem of obesity,” Mr Goetgeluk said. 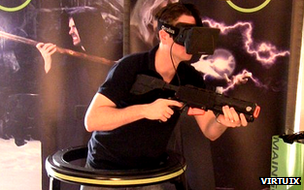 “The Omni makes exercise engaging, and gets gamers off the couch and onto their feet.

“Hardcore gamers might become the fittest guys or girls in the room.”

Omni is not the only equipment which can track user’s footsteps, but Virtuix says it would be the first to be affordable and small enough to appeal to home-gamers.

Although some buyers might be discouraged by its 48in (122cm) diameter and 50kg (110lbs) weight, the firm notes it can be disassembled and stored when not in use.

But one expert questioned how wide its appeal would be.

Brian Blau carried out research into virtual reality hardware and software at the University of Central Florida before joining the consultancy Gartner.

“The Omni will be a fun experience, but because it’s a niche product and needs to be paired with a head-mounted display and games made specifically for the device to deliver the best experience, it will have a limited market,” he said. 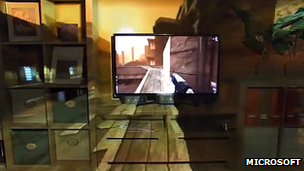 Microsoft is developing Illumiroom, an alternative to VR which projects images onto a room’s walls

“Alternative entertainment interfaces, such as a Kinect paired with a normal display or even Microsoft’s Illumiroom project [which projects graphics onto the room beyond the TV] will attract more game developers.

“While not an exact replacement for the immersive experience that Omni will bring, they will be accessible and available to a much broader audience.”

Virtuix will get a better idea of whether games developers are willing to optimise their titles for Omni when it shows off its prototype at the E3 video games convention in Los Angeles, which begins on Tuesday.